I like to go to hot springs. Actually, I should clarify; I like to go to nude hot springs. Yep, you read that right, nude. Anyone who knows me knows I’m not big on hugs or general physical displays of affection (not sure why, my parents hugged me, don’t worry). I’m also a pretty private person, and a little more buttoned up then I’d like to admit when it comes to naked matters. But talking to strangers in the nude, in a relaxing hot spring is rather enjoyable. And yes, I hate small talk. I hate when someone I don’t know wants to talk on a plane, or in a Lyft, or just about anywhere really. I know I sound like an asshole, and maybe I am, but I just have a rather small bubble I like to maintain. This bubble grows quite a bit though when I’m at the hot springs.

I should mention that I’m not talking about just any nude hot spring, I’m talking about a hot spring near Moffat, CO, called Valley View. I’m using the real name because I assume not that many people will read this other than my parents (in which case, Mom and Dad, please warn me if you go there). Otherwise, it’s a place I like to keep fairly secret. This is mainly because Valley View is never overcrowded and has such a cool, relaxed, open vibe about it that I would hate to see ruined. There also aren’t a lot of people I know who I wish to run into naked unexpectedly.

My boyfriend Bret was the first person to introduce me to this place. I’ve been there a few times, all of which were beyond enjoyable, and I decided I wanted to invite my friend Danielle for a girls’ weekend. We booked a yurt on a nearby camel farm (I’ll come back to this) and took off early on what was a pretty stressful Friday at work. Oh ya, I met Danielle because we both worked at the same company. We bonded at a company retreat after eating some edibles and finding ourselves in front of a dessert table, the rest is history. She makes the small list of people I know, and even smaller list of people I work with who I’d be ok spending a naked hot spring day with.

On this particular Friday there was some snow forecasted along the way. From the looks of the radar though it didn’t seem that bad, and it even looked like we’d be on the edge of it. Oh how wrong we were. By the time we hit Bailey, CO, it was starting to come down pretty hard as the sun was setting. It got worse and worse…….and worse. As soon as we got to Kenosha Pass, it was a whiteout. We turned the corner and there were cars sliding all over the place, trucks jackknifed, and tons of wind that made it almost impossible to see. I was driving with white knuckles, wishing I would have gotten the new all season tires I needed before this trip, and wondering where we would be able to turn off. I couldn’t remember what the next town was, and pulling off on the side of the road seemed pretty dangerous. I entertained the thought that we might die, but just as I was coming to terms with that we made it to Fairplay. I have never been so happy to make it to that town, which is otherwise, pretty underwhelming aside from the South Park sign. We got a hotel, found a Lord of the Rings movie on TV (nothing is more calming than Gandalf), took a deep breath, and thanked the snow gods for having mercy on us.

We missed one night at the camel yurt, but got up early the next day to head straight there. The temperature was in the teens that morning, but the snow was gone and the sun was shining. We made it to the camel farm and pulled up to our pretty freaking charming little yurt. So why did we choose to stay in a yurt on a camel farm you ask? I’m a little fuzzy on the details, but I know at one point we were drinking wine and decided that for whatever reason we needed to stay in a yurt. After Googling yurts around the area, we found the camel farm. I was a little hesitant at first because if I’m being honest, farm animals make me a nervous. And yes, I grew up on a farm, but in my experience (which is very little) farm animals are unpredictable and dangerous and kind of sneaky. Danielle convinced me to get over it though, and soon enough we found ourselves in a yurt, complete with camel soap, camel printed sheets, camel coffee mugs, and various camel themed books. Side note, if you’ve never read the book Tracks or seen the movie (available on Netflix), I highly recommend it. It’s the true story of a badass woman who trained and rode camels solo across the Australian Outback for nine months.

After unloading the car, we headed 20 minutes down the road to the hot springs. It was mostly just as magical as I remembered, but there was something different about the vibe. We encountered some pretty strange dudes who seemed to be a lot more talkative than I had ever experienced there. It could have just been the crowd that day, but I think a large part was due to the fact that I was there with another woman. Because of this, we came off as more approachable I guess? I don’t know, I just know my experience being there with my boyfriend was different and more relaxing. For example, Danielle and I were alone in the pool, doing some laps when a guy came up to the edge with this towel and shirt on and started laughing. We looked over and he said we were lucky because we didn’t have to worry about the cold weather “affecting” us. Ummmm, ok guy, gross, no one cares about you and your tiny penis.

Later on we were both reading books in one of the smaller pools. I was reading “The Hitchhiker’s Guide to the Galaxy”, and Danielle was reading “Sometimes a Great Notion”. Two men who kept talking to us despite the fact we were reading, commented on being surprised by our literary choices given that they were not romance novels. Ya bro, women read things other than Fifty Shades of Grey. We even vote, and go to college, and bring home paychecks (which are usually less than men’s for the same job) but I won’t get into that now.

At one point, two other men, one of whom told us that he was a health guru who drinks his own urine every morning, started doing tai chi naked outside of the sauna. I almost didn’t recover from seeing that, but aside from all the nonsense we had a decent day. A strange day for sure, and one that reminded me how much bullshit women continue to put up with, even in the most unsuspecting places.

Alright, so after a pretty bizarre day we decided to just fully embrace the weirdness and  drove to a town called Crestone for dinner. Crestone is, in a word, eccentric. I could probably dedicate an entire post just to this town and all its quirks, but for now, imagine a weird intersection where spiritual awakening and conscious living meets in a small town with a population of less than 200 (shit gets weird). We went to dinner at one of the few restaurants there, which served everything from thai food to yak burkers. It had a salad bar, communal style seating, and an indoor patio complete with Buddha fountains and flowers. I convinced Danielle to order a pizza that could have easily fed a family of four, YOLO.

By the time we got back to the yurt it had gotten pretty chilly. We could see our breath, and the little space heater wasn’t helping much. So we curled up in our camel printed sheets and blankets, continued to eat leftover pizza, and read ourselves to sleep (for me that takes about 10min).

The next morning we got our much anticipated farm tour. Well, Danielle was definitely more excited about it than I was, but I was curious if we were going to get to try some camel milk. Turns out the FDA hasn’t been too keen on camel milk sales, so they were not a working dairy for the time being. They still had multiple camels to tend to, along with a couple donkeys, and what sounded like a handful of dogs and cats. Danielle is an animal lover and seems to be really calm around them. I on the other hand, was pretty terrified when the camels were let out of the gate. This was after a sneaky little donkey named Snowflake decided to head butt me when I wasn’t looking. I’m pretty sure animals can just sense that I’m not really into them, and in turn mess with me for kicks and giggles. Whatever. 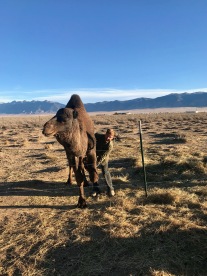 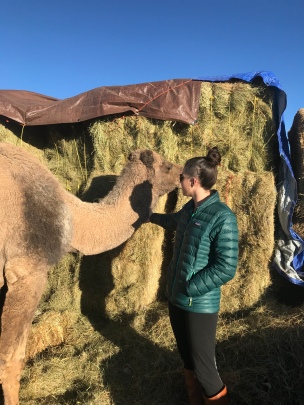 After the tour, it was time to get back on the road. I would say overall, it was a pretty memorable two and a half days. Even though I didn’t have any camel milk to show for it, it’s one weekend I won’t forget, despite trying to block the naked tai chi out of my mind.

I should mention Danielle is embracing her inner millennial and will be moving to Portland, Oregon in a few weeks. We’re driving her Suburu and two rescue dogs out there, so I anticipate there will be a few more bizarre experiences to share. Hopefully ones that don’t involve snow storms and overly confident men (fingers crossed).

Until then, stay weird my friends.